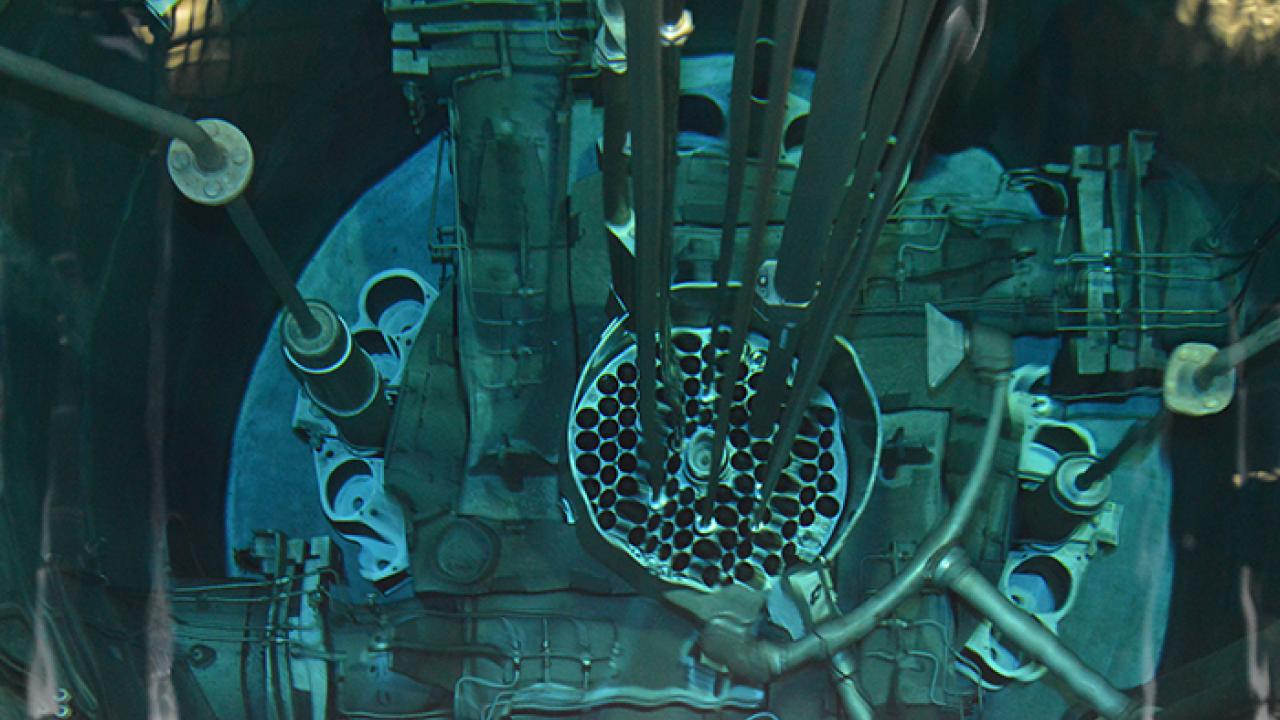 On January 20, 1990, when the nuclear reactor at McClellan Air Force Base achieved its first sustained nuclear reaction known as “criticality,” it was the newest reactor in the United States.

This long hiatus between new reactors reflects the conflicted relationship with nuclear energy and research in the U.S. On the one hand, nuclear power does not emit greenhouse gases—a huge consideration with respect to mitigating climate change. But how and where to store the radioactive waste remains problematic. And nuclear accidents, such as the 2011 meltdown and release of radioactive material at Japan’s Fukushima Nuclear Power Plant, has significantly undermined public confidence in the safety of nuclear power.

Since that first reaction in 1990, the McClellan Nuclear Research Center (MNRC) reactor has been operated safely and without incident, first by the U.S. Air Force and then, beginning in 1999, by UC Davis. Unlike the very large commercial reactors (over 1,000 times as large) MNRC is a small research reactor that doesn’t generate power. And even at the mature age of twenty-seven, it remains the newest research reactor in the country.

But now some experts think nuclear energy and research may be experiencing a resurgence due to global warming and the need for new sources of vital medical isotope production. And to address this potential growth, UC Davis is positioning MNRC to educate a new generation of nuclear scientists.

“When I studied nuclear engineering at UC Berkeley in the late 1990s, my professors assured me of the impending nuclear renaissance even though enrollment in the field was at an all-time low,” said Wesley Frey, director of MNRC. “It took much longer, but with the promise of safe, reliable, and carbon-free emission baseline electrical generation, the nuclear renaissance may be here, at least to a small degree.”

Frey explains that “nuclear renaissance” is often in reference to the Generation IV advanced nuclear reactors. “These are a family of power-generating reactors that have been proposed as replacements for the current reactors in the U.S. But as of now there is no concrete date when this will happen.”

New nuclear initiatives are happening but on a much smaller scale in the U.S.

Coquí RadioPharmaceuticals, a medical isotope company, has partnered with the University of Florida to construct a new nuclear research reactor to produce Molybdenum-99, the most widely used medical isotope in the world. The facility, which will be located in Progress Corporate Park, Florida, is scheduled to break ground this year.

And even though there is limited support for building new nuclear power plants in the U.S., other countries are expanding their nuclear power capabilities.

The main difference between these large nuclear reactors for power and the much smaller research reactors is scale. The MNRC reactor core is only a few cubic feet in size whereas a commercial power reactor core can be several thousand cubic feet. Both use U-235 to fuel nuclear chain reactions. But where the small reactor vents the heat generated by the U-235 atoms fissioning as a by-product, a large reactor uses this heat to boil water to make steam turn turbines for electricity. Instead of electricity, MNRC’s research reactor creates irradiation and neutron radiography.

Neutron radiography is similar to x-ray radiography but uses neutrons to create an image by allowing low atomic mass material like water to be seen inside higher atomic mass materials like aluminum. It is used in important aerospace applications, which is why the reactor was originally built and commissioned by the U.S. Air Force: To detect corrosion and hidden defects in aircrafts using non-destructive testing techniques.

But the reactor’s capabilities apply to more than just aerospace. Other fields and industries that use the irradiation and neutron radiography capabilities of the reactor include material science, medicine, electrical engineering, plant science, geology, chemistry and physics.

Educating the next generation of nuclear scientists

To some extent, the lack of new nuclear research facilities has helped MNRC stay relevant. It remains the highest power TRIGA™ (Training, Research, and Isotope Production General Atomics) reactor in the U.S.

Which is one reason why—in addition to continuing to offer research support services—MNRC is leveraging this unique and powerful resource to address national needs in education and research in nuclear science and engineering.

“Starting in spring of this year we will be offering a new series of classes through the UC Davis physics department so that students can learn about the nuclear industry and become licensed reactor operators at the MNRC,” said Frey.

Frey became interested nuclear science at an early age, about 12 years old. A friend of his father’s, a retired professor, would talk to him about nuclear engineering. He was hooked. He studied nuclear engineering UC Berkeley and then did his doctoral work at Oregon State University.

Frey encourages students who might be interested in nuclear science to watch the PBS Nova documentary “The Nuclear Option,” which presents an in-depth look at the challenges and possibilities of nuclear energy.

Student who would like to learn more about the classes at MNRC can email Frey at wesfrey@ucdavis.edu.